Marie Runs the Art Loeb Trail in a Day!
stories from camp

They’ve got grit! Last Saturday, Marie and three girl friends (including Janna Barton Carlson, Illahee trip leader and activity instructor since 2011) headed to Camp Daniel Boone at 5:30 a.m. to start their 30 mile through run on the Art Loeb Trail. They finished 10 1/2 hours later having covered 8000′ feet of elevation- an unofficial record for a women’s supported through hike on the Art Loeb. Since the fall, Marie has been running trails in Pisgah on Tuesday and Thursday mornings before daylight. In January, they added long Saturday training sessions and set the April date. 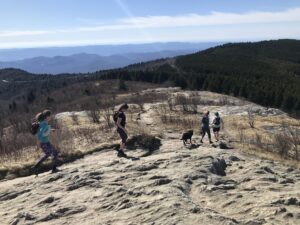 Spouses and friends provided support meeting them at designated points along the way. The first 8 1/2 miles was an uphill slog with relief found at the first meet up. Janna’s dog, Moose, a Lab Healer mix ran the entire trail with them. An unexpected Parkway closure was a disappointing hiccup for their resupply point at the 13 mile mark; thankfully a friend biked in from the Black Balsam parking lot with a partial resupply. 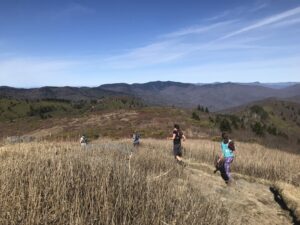 This is the section that Illahee girls would recognize from the 7th hike- up above the tree line on Tennent Mountain. From there, a steep down hill was followed by a climb up and over Pilot Mountain then down to Gloucester Gap where they were surprised with music, sandwiches, Gatorade and cheering. Their hardest mental segment followed between there and the 25 mile mark. Janna’s husband, Chuck, biked in to a trail intersection bearing Gatorade and roasted potatoes, the fuel needed to complete the last five miles. They ended at Davidson River Campground where friends and family delivered Cookout milkshakes while they soaked their feet in the river. Turner brought in his Ooni Pizza oven and ten pounds of dough he had prepped the day before for a celebratory pizza party in honor of the run and (Marie’s birthday!) 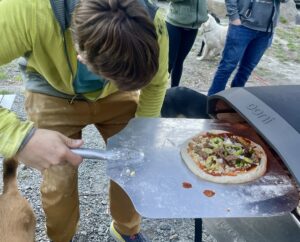 Cheers to this group of runners and to the friends and family who gave them the support along the way! What’s next? Why, camp of course!
Laurie