Archives for October 2022
stories from camp 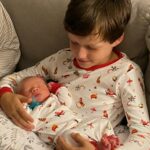 Gardner and Lucas welcomed Jasper into the world on October 13th, a week ago, in Columbia, SC. At 7lb 11oz and 20″ long, he was the same size as his brother Brooks on his December 25th, 2013 birthday. And both boys were born on a great-grandmother’s birthday- Brooks on Gordon’s mother as well as Laurie’s … Continued